While she’s probably best known for singing the original version of “Hound Dog,” Willie Mae “Big Mama” Thornton played harmonica and drums and sang in many rhythm and blues bands throughout her career, starting in the 1940s (Gaar 1). She was completely self taught; in her own words, “My singing comes with experience. I never had no one to teach me nothing. I taught myself to sing and to blow the harmonica and even to play drums, by watching other people” (Gaar 2). Her legacy inspired Janis Joplin, who covered Thornton’s song “Ball and Chain.” She must have inspired other legends too; the part at the 4:10 mark of “Ball and Chain” reminds me of Robert Plant’s singing at the 6:10 mark in Led Zeppelin’s “You Shook Me.”

Big Mama Thornton’s version of “Hound Dog” hit number 1 on the 1953 R&B charts, but Elvis Presley’s cover definitely overtook it in popularity. It’s tragic that Thornton never achieved the fame or money she deserved for her hard work; royalties from “Hound Dog” went to songwriters Jerry Leiber and Mike Stoller, not her (O’Neil 1). “Ball and Chain,” which Thornton composed herself, was copyrighted to her record company, so no royalties from that song went to her either (O’Dair 16). She died in 1984 of heart and liver failure, most likely due to extensive alcohol abuse that reduced her from a hefty 350 pounds to a tiny 95 pounds (Gaar 1). For whatever reason, she has yet to be inducted into the Rock ‘N’ Roll Hall of Fame, an egregious oversight. The Blues Foundation Hall of Fame recognized her achievements as far back as 1984, though. The Willie Mae Rock Camp for Girls, based in New York, is named after her.

After listening to Big Mama’s version of this song, Elvis’ doesn’t sound quite as awesome, does it?

There’s some really beautiful guitar in this one.

Sources used for this article:

“All this new stuff they call rock ’n’ roll, why, I’ve been playing that for years now… Ninety percent of rock-and-roll artists came out of the church, their foundation is the church.”

—Sister Rosetta Tharpe in an interview with Daily Mirror in 1957 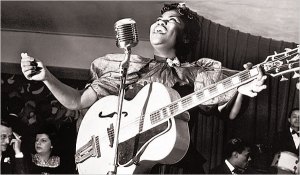 Writers such as Gayle Wald and Lucy O’Brien assert that the role of African-American women in the creation of rock ‘n’ roll has been largely overlooked (Weisbard 57 and O’Brien 83). While the influence blues and R&B has had on the genre is generally acknowledged, the impact of gospel music, created in Pentecostal churches largely controlled by black women, often fails to be recognized. Anthony Heilbut wrote in 1971, “All rock’s most resilient features, the beat, the drama, the group vibrations derive from gospel” (qtd. in Weisbard 56).

Sister Rosetta Tharpe’s pioneering work is too often ignored. Gayle Wald lists just a few of her impressive achievements: “[She was the] first gospel musician to sign a recording contract (in 1938, with Decca Records, with whom she would record through the ’50s); first gospel performer to play the whites-only Cotton Club and Harlem’s Apollo Theater; first gospel singer to do a significant European tour; for a time the gospel solo performer with the most Top 10 records on the Billboard ‘race’ (later, rhythm and blues) charts” (Weisbard 61). To watch her play is absolutely thrilling. A YouTube video of “Up Above My Head” shows her singing with religious fervor and boundless energy, then diving into a guitar solo with gusto. I would definitely go to her church. After seeing her in action, it becomes difficult to grasp why she isn’t acknowledged in most rock histories. She’s simply amazing, performing with an energy that is most definitely rock ‘n’ roll, moving about the stage like she owns it.

An ancestor of the “windmill,” a strumming technique thought to have started with either Pete Townshend or Keith Richards, is demonstrated in Tharpe’s performance of “Down by the Riverside” when she “slams a chord and waves her arm back and forth in a move that’s simultaneously testifying and directing the chord’s repeatedly bent notes like a choir-director’s baton (Ross 4).” Tharpe pioneered electric guitar technique on mostly Gibson guitars, including both hollow-body and solid-body Les Pauls and SGs.

Rosetta Tharpe’s “dynamic guitar playing” gained her the odd compliment that she could play “like a man,” and people of both genders desired to emulate her style (Weisbard 58). However, saying that Tharpe played “like a man” is misleading, considering that she was often better than the men she played with; Inez Andrews, who sang with Tharpe many times over the course of her career, reports, “The fellows would look at her, and I don’t know whether there was envy or what, but sometimes she would play rings around them. She was the only lady I know that would pick a guitar and the men would stand back” (Ross 3).

Unfortunately, this rock ‘n’ roll pioneer was ravaged by diabetes in her later years, losing her leg to the disease in the early 1970s. This didn’t stop her from performing in a chair, often jumping up and down on one leg while playing (Ross 3). The disease claimed her with a stroke in 1973, just as she was about to go into the studio to cut another record. She was a rather young 58. Her legacy lives on in the artists she influenced: Chuck Berry, Little Richard, Etta James, Johnny Cash, even Elvis Presley (“Suffragettes” 1).

“Whenever a rock or gospel or rhythm and blues musician turns the amps up, we’re living in the presence of Rosetta, who made a habit of playing as loud as she could, based on the Pentecostal belief that the Lord smiled on those who made a joyful noise.”
–Gayle Wald in Shout, Sister, Shout!

Posted in Musicians of the Month, Rock 'N' Roll Pioneers